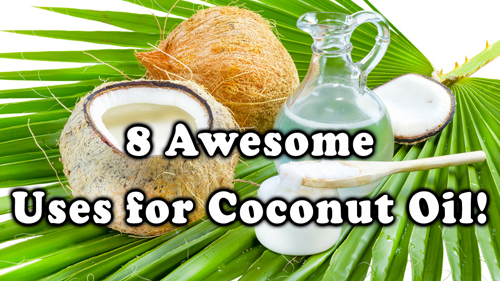 Coconut Oil has been used for centuries by the natives in many of the Tropical countries around the world and in more recent years it’s been rapidly growing in popularity throughout the western world due to it’s amazing health benefits and it’s almost unending list of uses.

Another interesting point to mention is that studies on these native cultures that consume large amounts of Coconut oil show decreased incidence of many of the modern illnesses and diseases experienced by those consuming more western style diets and that these native populations are generally in good health.

Today my aim is simply to make you aware of a few of the more common uses and health benefits.

One thing I will mention though is that to get the most benefit from your Coconut oil you’ll want to make sure that it’s Organic Virgin Coconut Oil.

So with that in mind, today’s 8 awesome uses are:

So there you have it. 8 things you can begin using Coconut oil for immediately! Believe it or not, there are hundreds if not thousands of benefits to using Coconut oil with more being discovered daily but I’ll leave those to another day as I doubt you have the time to read a list of 1000 uses for Coconut oil!

But before I go just remember you’ll want to use Organic Virgin Coconut Oil wherever possible.

Now, in the comments below let me know a few of your favourite uses for Coconut oil and how it’s made positive changes to your health and lifestyle.

Thanks for stopping by.

Your friend in Health & Performance,